The European Academy Networks (the European academies’ associations network, which consists of Academia Europaea, ALLEA, EASAC, Euro-CASE and FEAM), has officially launched the SAPEA (Scientific Advice to Policy by European Academies) Project in Brussels, Belgium, on December 13, 2016.The SAPEA Project is a conception introduced by the European Commission in order to facilitate cooperation between academies at the EU level. Aside from the European academies, this project brings together the academies from Israel, Armenia, Georgia and Turkey. The aim of this interacademy cooperation at the EU level is to provide the EC with an independent and interdisciplinary policy based on scientific facts, which will be facilitated by combining resources of 100 individual academies across Europe. Each of the academies has hundreds of members and encompasses all scientific fields and disciplines: social sciences, humanities, natural, technological and medical sciences. The associations of these academies have signed  the Memorandum of Understanding on March 26, 2016.

The Croatian Academy of Engineering participates on the SAPEA Project as a Member Academy of the Euro-CASE. 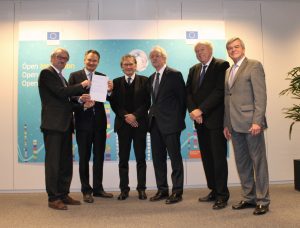 (EC Directorate-General for Research and Innovation),