The Croatian Cartographic Society and the Faculty of Geodesy, University of Zagreb, organized the 12th Conference on Cartography and Geoinformation celebrating the World GIS Day in Zagreb, November 16–18, 2016. By organizing this conference in the International Map Year (IMY), we wanted to contribute to the development of geoinformatics, cartography, geography and associated fields with special emphasis on GIS applications. A wide range of themes offered interesting lectures and a contemporary approach.

The first conference day there was lectures delivered in the Great Hall of the Miroslav Krleža Institute of Lexicography in the city of Zagreb. This time our keynote speaker was Prof. Dr. Joep Crompvoets from KU Leuven, with the theme Governance for a Smart World. The other topics included geodiversity and geoheritage, GIS in education at universities and in high schools, mapping vegetation cover, forest ecosystems, geomorphological research for the needs of the proclamation, expansion and management of protected areas, developing speleological geodatabases, presenting migrations on thematic maps, etc.

The second conference day continued in the Council Hall of the Faculty of Geodesy, University of Zagreb with some more lectures on different applications of GIS. Then, a Round Table was organized in order to start well in advance planning to celebrate:

After the lunch break, we visited the Croatian State Archive, with a rich map collection including also the reach cadastral material of the Croatian State Geodetic Administration. At the end of the day, the Open Source Geospatial Lab (OSGL) of the Faculty of Geodesy, Croatian Cartographic Society and IT-section of the Student Council of the Faculty of Geodesy organized the OsmGeoWeek workshop where participants were learning and working together, mapping in OpenStreetMap for humanitarian purposes.

The last conference day, a tour to Samobor highlands was organized by the Student Mountaineering Section of the Faculty of Geodesy, University of Zagreb. In Rude near Samobor we visited the St. Barbara mine.

It is not known for sure when exactly people started to work in the mines in Rude. However, certain data and remains of old and narrow galleries built without the use of powder lead to the conclusion that it was in the Middle Age, or maybe even in the Roman Age. According to the oldest available data, copper ore was extracted as early as 1210, and back then the village of Rude was called Rovi. According to the first reliable data which dates back to 16th century at that time the owner of the mine was Leonard Gruber who sold copper. The mine often changed owners, mainly due to financial crises.

Data on the copper production is scarce in particular for the 16th and 17th centuries. The year 1773 marked the beginning of more regular records on the production details providing evidence of a more or less constant mining, with some variations in the production, and from the beginning of the 17th cent. until the year 1800 the annual output was between 200 and 400 cents (1 cent=56.006 kg). The highest copper outputs were recorded in 1634 and in 1791 with 573 and 546 cents, respectively. It is also the time of the origin of the preserved pit map (1777) showing a wide extent of the underground works. Due to exhaustion of the deposits the production dropped after the year 1800. The exploitation of the copper ore stopped in 1851. The analysis of the existing data leads to the conclusion that the total production at Rude amounted to 2,200 to 2,800 tons of copper.

Nearly all of the ore excavated at the time was extracted in the area of Vlašić-Kokel pits, and only a small portion of ore was extracted from other locations such as the Classenbruch opencut where, before World War Two, hematite was extracted for the needs of the Sisak ironworks.

After the cessation of exploitation works, research works were carried out on several occasions with the aim to restore the mining activity in the area. Research was carried on before World War One and in the period between World War One and Two when numerous minor research works were conducted both on the left and right banks of the Gradna brook. Besides the exploration of iron and copper ore deposits, exploration and extraction of gypsum were also carried out, but further extraction of gypsum was stopped, despite its considerable quantities, because the percentage of anhydrite was too high (about 15%).

In the area of the mining part of Gradna, downstream Rude, gypsum was extracted in several sites. Exploitation started at the beginning of the 20th century and went on, with occasional interruptions, until the early ‘50s.

After visiting St. Barbara Mine in Rude we went to the Oštrc peak (752 m) where we made some photos and enjoyed the views of the surrounding hills. We enjoyed our lunch in the mountain home Veliki Dol, where a kind lady served a stew with gnocchi and cabbage salad, and apple strudel for dessert. We returned satisfied in Zagreb in the afternoon.

The conference Program and Abstracts have been printed and published (ISBN 978-953-95815-5-6). It is also available including many photos at the Croatian Cartographic Society web site www.kartografija.hr 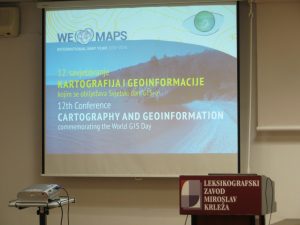 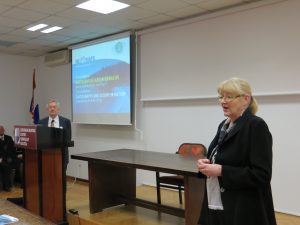 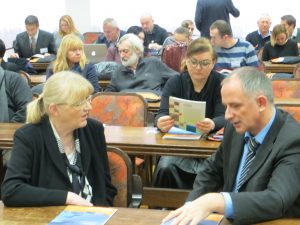 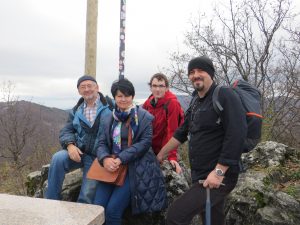 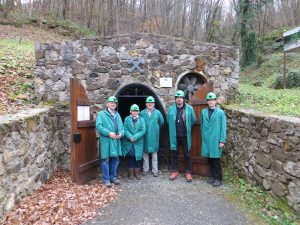